To Theists and Atheists Alike: What Are We Doing?!

Sometimes a story just hits you right in the gut and forces you to pay attention to each word, willing your eyes to read faster and your mind to quickly process every detail.
These stories force you to think and connect the dots with your own experiences and knowledge.

That’s what this story is about. It’s a story about a pastor’s wife who ministered to strippers in a loving, kind, and genuine way. She wrote a blog post called ‘I went to a strip club’, a salacious title meant to grab attention immediately, about her experience with these women.

The entire post is worth reading but as a pro-lifer, connecting her experience with broken women resonated. Specifically, she mentioned that these women were grateful for her presence and pointed out that her church was ‘different’. Why was that?

She said, “Apparently other churches send them hate mail. ALL THE TIME”

I’m sure my face turned three shades of white.

Complete shock and disbelief gripped me.

We both looked at each other and about fell into a pool of tears right there.

Sound familiar? It should.

Abby Johnson, a former Planned Parenthood director who left her job with the help of 40 Days for Life, has stories about receiving hate mail when she worked for the abortion giant. But you know what? She still gets hate mail…from pro-lifers!

The writer of the strip club post is a Christian and she rightly asks, “People – church –  WHAT ARE WE DOING?!” but you could make the case that you don’t even have to be a Christian to be asked this question.

It’s a question of basic human dignity and compassion.

This is a story from a pro-life atheist that exemplifies this position:

As an atheist I’ve had a conversation with an abortion clinic escort that turned into a Facebook friendship. I was at the Planned Parenthood in DC during a protest. The escort was a full-time stripper. She said she had talked with other pro-lifers who she could tell were only nice to her to try to get her to stop escorting but I was genuinely intrigued by why she did what she did. The conversation started out as me telling her about placing my son for adoption and gradually turned to us talking about how women tend to feel like they aren’t strong enough to carry a child to term. She said I gave her a lot to think about.

Just because we are kind and compassionate towards someone who we don’t agree with, it doesn’t mean we endorse their behavior.

By calling women who choose abortion a ‘murderer’, the pro-life movement makes zero progress towards converting the other side. Who wants to join a movement of angry, mean individuals who deem it appropriate to demonize people they don’t agree with? No one.

We are the pro-life generation and we will abolish abortion but we aren’t going to do it by screaming at the other side or by sending hate mail to those we don’t agree with.

And we will end abortion. 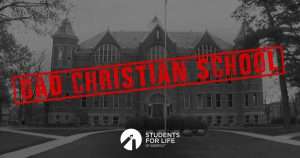