We Finally Agree: Roe is Going to Go

Hell must have finally frozen over because the unthinkable has happened: pro-life and pro-abortion sources are agreeing on something. Nationwide, media organizations of all ideological affiliations are sounding the alarm that Roe v. Wade is on its way out. For a long time, Students for Life of America has been mocked for saying this, but through working hard to say good riddance to this godforsaken ruling, the path forward has now become glaringly obvious. Take a look at some of the media who are shaking in their boots at the power of the Pro-Life Generation:   At the New Yorker, it was reported that the Supreme Court looked ready to overturn Roe v. Wade as the outlet claimed

Send a message of support to Ke’Ontai here!
by: Kristan Hawkins

Standing up for what you believe in isn’t always easy. Sometimes something unexpected happens, and it’s at that moment you will decide whether or not to change course or continue on. This Monday, our team received a phone call from one of our 17 year-old high school leaders in Alabama who faced that moment this weekend.

Ke’Ontai called us from the Emergency Room, saying he was going to be okay but he had a broken nose!

He had been out in his neighborhood park on Sunday passing out Students for Life’s Abortion is not Social Justice postcards, when one man started arguing with him about when life begins. He shouted at Ke’Ontai that his wife had just had an abortion because “that’s what they needed to do.”

And when Ke’Ontai tried to give him some post-abortion counseling material, the guy yelled that he didn’t want it, pushed Ke’Ontai down, and started punching him in the face.

After telling him to file a police report, we asked Ke’Ontai if he needed anything from our team.

His reply stunned me. Ke’Ontai said that while he had forgiven the man who assaulted him, he just wants pro-lifers across the nation to pray for the man and wife.

While our National High School Coordinator, Missy Martinez, and myself had a conversation with Ke’Ontai about handing out postcards with a buddy in the future to help protect him. I want you to know that Ke’Ontai won’t be letting this assault stop him.

He is a courageous, young man…one that I am proud to say that Students for Life has helped train and equip. And now, he is more motivated than ever to do all that he can in his school and community, especially his predominately African-American neighborhood, which, according to their own outrageous admissions, is targeted by Planned Parenthood.

While he was at home recovering from his assault, I asked Ke’Ontai to share his story… of how he become an abortion abolitionist and why he has courageously dedicated his life to restoring justice to the preborn and their mothers. This is what he had to say:

I was born in Tuscaloosa Alabama. I go to Central High School where most of the students are black.

One day on my way to a friend’s house, I passed by the abortion facility here in Tuscaloosa, and I saw a lot of people standing outside. At that time, I did not know what was going on. Some people were praying and others had signs that read, “WE ARE PRO-LIFE.” So, I turned around and stopped my car. I wanted to get out to see what was going on, but I was scared. I was just sitting in my car looking around, thinking, “What is going on?” As soon as my mom got home from work that night, I started asking her all kinds questions about abortion, which was something she know nothing about.

About a week later, I was with my brother at the University of Alabama, and I met Claire. She had all of this “Pro-Life” stuff with her and I asked her what it meant. She told me about this place where girls go and get their babies pulled out of them and thrown in the trash. I had learned the truth about abortion.

On my drive home, I was thinking about where I had first seen the word “Pro-Life” and then remembered that it those people must have been standing outside of the abortion facility. When I got home, I cried and told my mom that people were killing babies here in Tuscaloosa.

That night, I went on to Google to see for myself what was happening. When I finished my research, God said to me, “GET TO WORK.” And I did!

The next week, I went to school, and I tried to start a Students for Life group. But, I ran into a lot of roadblocks with the school administration  They would give be obstacles to get through and when I did what they asked, they would give me some more stuff to do. When I was got through all the roadblocks, the administration told me that I needed a teacher to be a club advisor. I went to every teacher at my school and none of them would do it. But, I didn’t let that stop me. Instead, I just worked with Missy at Students for Life and started a community group. Already we have hosted multiple events to educate others teens in Tuscaloosa about abortion.

This past Sunday, I was in a park handing out Students for Life’s postcards. A man stopped, and we began a conversation about abortion. He started to get upset. He yelled at me, slapped all my postcards out of my hands, and pushed me down. At that time, I did not know what to think. The guy was almost 350 pounds! Then he get over top of me and start punching my face. I was trying to get away from him, but I couldn’t get out from under him. I finally escaped and quickly drove home as fast as I could.

On Monday, I went to school and my principal sent me to the hospital because my face was beaten so badly. The doctor told me that I have a broken nose.

At first, I was mad, but then I realized that I cannot be mad at this man because I know that he did not hate me, he just did not want to hear the truth. I feel deep down inside that there was something more to his actions than what meets the eye. All I can do is forgive him and pray and love him the way God loves me.

Since Monday, many people have asked if I am going to stop doing my pro-life work because of what happened.

You want to know what I have been telling them?

When Jesus was on that cross, and they were beating him. He didn’t stop.

Send a message of support to Ke’Ontai here!

We Finally Agree: Roe is Going to Go
Read more +

Kristan Hawkins: America Needs to Get Ready for a World After Roe
Read more + 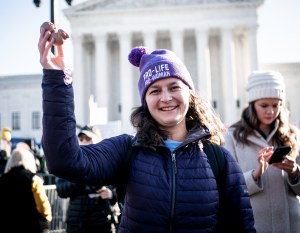